Its a Tribe town, This is my Team!

How in the Hell can any one of us still be fans of any Cleveland sports franchise?

The Drive, The Fumble, The Shot, The Meltdown, The Shoulder, The THIS, THE THAT DAMMMMMITTTTT! 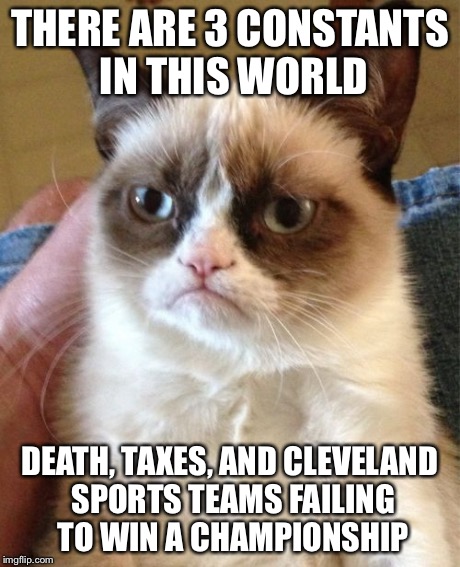 Every single year I get hooked.  Not just hooked hooked, I mean buying jerseys, shirts, season tickets, hats, mugs etc hooked.  That HOOKED!  And every year I Say it’s not going to happen to me this year.  Those Bastards are not getting any of my money…I guaran-damn-tee you that! But then some glimmer of hope shines over the horizon.  We make a great trade or we pick up a few more picks in the draft, or an aging past superstar wants to come to town to take some of our money and never produce numbers even close to where they were. It’s always the same old story, same old song and dance every single year.

Now I am plenty old enough to remember the good old days when Brian Sipe and Bernie Kosar actually won games and we were just a game away from the Super Bowl. The 90s were a great time for Indians baseball giving us two World Series visits and two World Series heart breakers.  The Cavs of old were amazing but the greatest basketball player of all time kept us out of the finals every year. Flash back to the present.  I intentionally waited for three events to pass with my sports teams before I finished this little tirade.  The start of the NBA playoffs, The NFL draft, and the first 30 games of the Indians season. The draft was pretty good.  We should one helluva of a great special teams unit, which means we are gonna suck again.  Welcome to another 2-14 season Browns fans! Maybe next year.  The Tribe is off to a pretty decent start at 15-13, but there is still a lot of the season to go and plenty of opportunity to screw it all up.  The pitching staff is in pretty good shape even though we lost a top performer for a couple months, but we still need a couple of big bats to thicken up our offense.  The Cavs have swept both rounds to this point and look really good, healthy and motivated, so you just know something stupid is going to happen to screw all that up.

Unfortunately that is how we Cleveland sports fans have to think.  It sucks, but it the cold honest truth.  So here is to the “Big 3” in hopes they can bring a title to Believeland!

2 thoughts on “Why Are We Still Fans?”